Posted on 14 May 2013 by modernwashboarder

I just saw the amazing Pokey LaFarge play a show in Loomis, California. This guy’s the real deal, and everyone in his band, the South City Three, is simply fantastic. Since this is a blog about washboards, though, I’m going to focus on LaFarge’s boardmaster Ryan Koenig.

Playing washboard (and occasional snare drum) is actually Koenig’s backup gig with the band; his main things are harmonica and backing vocals. That doesn’t mean, however, that he isn’t a full-on washboardiste. He plays a board with a galvanized spiral crimp, and it’s decked out with a horn, several cans, a tambourine hi-hat mount, a wood block and a call bell. He wears a thimble-bedecked glove on his right hand and thimbles (with no glove) on his left.

Koenig’s style is very rhythmic, and, despite the fact that he regularly manages to hit every piece of gear on his board, quite spare. His playing gives the impression of a quiet little machine driving the songs with an array of clicks, scrapes, honks and clangs. Very nice. His work on his micro drum kit (snare, splash, woodblock, cowbell and closed hi-hat) is also good. He has a Baby Dodds approach to the drums, and drops in his woodblock patterns and his cymbal chokes at just the right moments.

You can find out more about Pokey LaFarge and the South City Three here. They’re highly recommended. 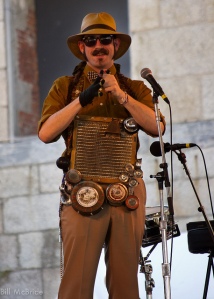 Ryan Koenig: he looks like a mirror-universe Leon Redbone.